“Respect the mountain,” said Tobie Reynecke to the other 5 of us trekking up the Black Mountain. If ever there is to be a 100 miler club in SA, Tobie will be the first life member. He has completed 54 to date and attempted a few more!

The Ultra Trail Drakensberg 100 miler (UTD) starts at 11am, at 2900m up. We were less than a marathon into 100 miles, feeling the cold seeping through layers of clothes. We had traversed the edge of the Drakensburg escarpment on the Lesotho side seeing the sunlight play with clouds, buttes and ridges; it was all spectacularly breathtaking. You can picture dragons hording treasures in inaccessible lairs here. And Tobie was warning both the uninitiated and experienced in our group: "Respect the mountain".

Oliver and I had shared a good few miles together on the ridge, swapping stories of family, life and running. He is an accomplished ultra athlete and I’m jealous of his speed! Andrew Booth organizes the Karkloof 100, the last of #RunAMUK’s 100 milers… and he’s also an accomplished ultra athlete. Andre had offered me a pair of tracksuit pants when I realized I hadn’t packed my tights (space was an issue). Jian was feeling the cold, but concentrating hard and acting as a real trooper. And of course Tobie, an affable lawyer from Pretoria who is a solid gentleman, and because he struggles to see at night had asked me to be his eyes; I’m glad I said “yes”.

UTD is the second event in the #RunAMUK challenge offered by the collaborating 4 event organizers. There were to be 11 of those who completed Addo at the top of the Sani Pass… it was the last time we were all together. The two events begin 6 weeks apart, with the 3rd event (Mac Mac Ultra) just 4 weeks later. Handling the attrition on the body would be key. I’d been worried about 3 things: my run streak, the cold, and the altitude.

Starting 100 miles too fast or too slow can both mean “DNF” (did not finish); and it depended on the bodies condition. Altitude and temperature require personal adjustment each time you line up for every athlete… fast or slow! I knew what it meant for me, and was prepared. Relatively. I hadn’t considered underfoot conditions: by the time we returned to the Sani Mountain Backpackers and Checkpoint 5, I had already rolled my left ankle twice and twice more stepped into hidden holes with my left foot to fall on my right knee and elbows; and kicked 358 stones or rocks (I didn’t actually count). It was nearly sunrise…

But I am ahead of myself in this story, rather unlike in the race itself! The start from the border post is suitably full of mountain pathos. This is partly to do with the race briefing where we’re all told how we should be prepared for the cold, that the course is marked but shouldn’t worry too much if its inaccurate (there are many goats paths and it isn’t always the correct path that is marked), and a GPS is a life saving piece of equipment. Lastly: don’t pick a fight with the local dogs, back away keeping eye contact and pretend to pick up a stone. I didn’t see any dogs… 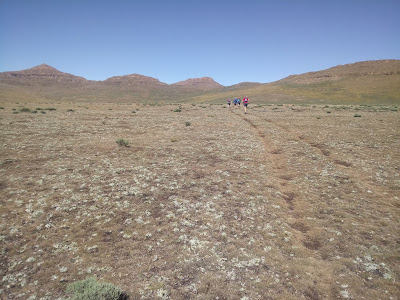 Some of the big names of trail running & the supporting community were there including Naomi Brand and Xavier Briel who circumnavigated Lake Malawi to highlight the cause of poaching pangolins, much like I am doing for One Land Love It; Eloff Hoffman, Frikkie Pienaar and Andrew Booth who organize two of the other AMUK races; Lauri Tuomaala of Finland; Tracy Zunckel the queen of the ‘Berg; Deon Braun of Trail Magazine and consummate analyst and thinker; Oliver Ruhl an accomplished ultra distance runner capable of a silver at Comrades; Rene Vollgraaff who pipped me to the post by miles at Addo and capable of going miles more; and more… In fact, all these who lined up have earned the right to be there!

The first 10km was basically a traverse around the back of the ‘Berg to get to your first checkpoint (see first photo). This overlooked the cliff that falls of the edge of the world… it is where cats come with your toys to shove them away, and the rooftops of caves where dragons hide their precious hoarded treasures. You don’t quite stumble onto it, you get hints of how high and far you can see as you approach the edge, and with the light being almost perfect at this altitude the views are fit for royals (I’d say its breathtaking, but its too high for that, you’re already out of breath just from breathing!)

Run with meaning. Walk with intent. Rest with purpose. The weeks leading up to UTD had been stressful, and these three phrases now became a key part of my mental game. Each time I wondered or slowed in energy, these three phrases would pop into my head and keep me focused.
Around the mountains we went, chased and chasing each other. Andre and I hooked up, with Tobie and Oliver just behind as the sun set. We dressed up now because the temperature was plummeting. Black Mountain was coming… so don’t dress too warm! A short while later Tobie and I pulled out a bit of a lead on the other two, who were shortly joined by Andrew and Jian. That little lead cost us missing the markers leading up the first sustained climb of the race. We discovered our mistake 600m later… and traversed back up to the course to join the other 4.

At least 2 of our number were experiencing altitude sickness. Unfortunately this meant the withdrawal of Andrew at checkpoint 3, 45km into the event… It is the last “easy” place to drop from the event until Sani Pass 30km later.

After eating, drinking, being merry, and dressing even warmer, the fabulous five of us set off for the big one, the reason some run this race. Thabana Ntlenyana stands at 3482m (11424 ft) above sea level. There was no real wind… fortunately. A stiff breeze was only found on top. Getting up into that breeze took us about 30 minutes more than my planned time, except that I had been 30 minutes ahead of plan at the previous checkpoint... 60 minutes lost to plan. At night it isn’t easy to see the trails (all of which criss cross each other multiple times as goats scour the landscape for food). And the marking is not as copious as at Addo; it increased both the adventure and sense of satisfaction at the end; and I wouldn’t change it for the world. 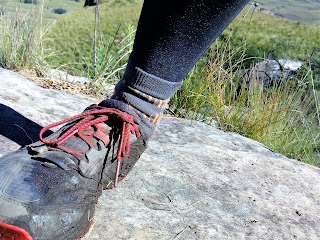 The route up and down the mountain was pretty well all up. It required crossing rivers. Wearing my Balega Blister Resist socks I knew that my feet would be as protected being wet and very quickly warm up, too… and I remained blister free even after walking through most all the streams instead of treading precariously on rocks and loose stones.

Reports have mentioned minus 9 ‘C (-48’F) at the top of Thabana Ntlenyana. The volunteers there were a special breed! Nearing the top we began crunching ice as a kind of rhythm section of a strange band. I stayed with Tobie making sure he stayed on the course, while the other three pushed to get out of the wind and cold. I was channeling Lewis Pugh (excuse the pun)… I wasn’t cold, I wasn’t allowed to be.

12.14am and we were at the highest point in Africa South of Kilimanjaro. After a very quick refuel at the top, and a photo, Tobie and I were left by the other 3 as they motored down and out of the cold. For about half a mile I kept them in sight, hoping to catch up as they stopped to greet other adventurers still ascending to the top of our world.

And then it happened again… Tobie and I found ourselves off course. Having been keeping too much attention on headlamps and not enough on course markers, I missed when Jian, Oliver and Andre turned left. We went straight and ended up wasting about an hour in deathly cold conditions, traipsing East and West while my GPS showed us only moving North. Sense of humor: failed.

01.30am We had to stop to get Tobie’s GPS of his bag. Fortunately it worked and we didn’t have to go up and down searching for the path again… already we’d done an extra mile or more! By quickly finding the right path again we stayed ahead of the chasing pack, crushing ice as it lay forming on the ground. As the night went from 2am to 5am our conversation slowed, but I kept our hiking pace up. There were no animals out at this hour, just us ghostly shapes seeking slender paths and hoping checkpoint 5 really was just around the corner and over the hill (the lies of ultra runners… we always look good!)

4am. Unfortunately when the lights of the border post do hove into sight on the left as you crest a saddle you realise that they are still an hour or more away. We were trudging in silence to the crunch of iced gravel and grass. Tobie had begun to really feel the cold, as had I. There was one more layer I could have put on and I nearly stopped to do so. We were walking into a breezy headwind taking the chill down well below freezing again. And those lights didn’t move.

From memory it would start getting light at 5.30. We were about 1km away from those lights when it did begin to get light, but actually it was further. And it took longer. And it got a little colder. But Tobie piped up, “we go over here, skirt the field, head up the road and we’re there”. It was a statement of hope, energy and fact. Tobie was back. And we reached the checkpoint soon after. It was warm, welcoming, welcome.

I’ve been told I’m charming. I assume that means I’m also good at flirting. But what I heard next was the first time ever these words were directed at me. Bearing in mind that I had planned to be back at checkpoint 5 by 3.30am, and it was 6.30am, the doctor who had cleared me after checking my pulse and when last I had urinated said, “You’re flirting with cutoff, boys, and you’d better push to make sure you don’t get cut”.

It was time to get up, and get down Sani Pass! To be continued… 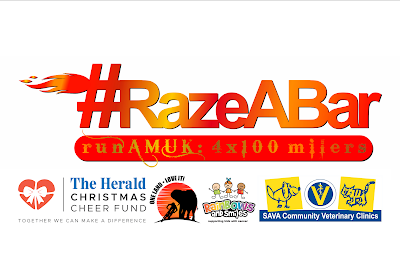