A disclaimer is what I start with here... I own one. Undoubtedly my Alto is the best value for money I've owned; and of course it is discontinued. A few years ago I had the privilege of driving a Ciaz for a few hours and an Ignis that reminded me of the Tardis!

When the Suzuki Ciaz was launched in South Africa in April 2015, it was headed with the words, “A

touch of four-door class”. Yes. The Ciaz GLX comes with leather upholstery including the steering wheel . From when you sit to when you stand, this car is class. The design belies its supposed size. It is big for its class, ideal for a growing family to transport. Looking at the outside is easy on the eye, too; not in the super-model kind of way, rather in the familiar city popular looks kind of way.


The standard safety features (here I’m thinking of that family again) on all models are good. The only feature missing from the GL is the front fog lamps, which in South Africa will only be missed once every couple of years. I'm not a fan of those who leave them on normally, so maybe not having them is a safety feature?! 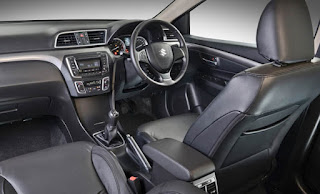 4 sets of golf clubs should fill the size of that 495l boot… My family of 5 might be able to get away for a self-catered long weekend if we pack it just right. Of course, there’s no pram space, but the toddler is growing up and needs to practice his walking anyway (but why would we want to walk if we could spend it on leather seats driving some of the scenic passes of the Eastern Cape)?

Power was not lacking from the 1.4l engine. It easily climbed the coastal hills, took off in good time from a standstill and engaged all the gears comfortably. A test at altitude might reveal something different. 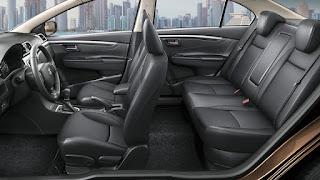 Road noise was minimal in this car. It provided for easy listening to both my co-pilot and the radio (6 speakers and good clarity from them… I know what music I’ll get going in this car). The Ciaz range comes standard with Bluetooth for those phone calls you simply can’t miss. And eyes never have to leave the road. The instrument display and center console are both well laid out and intuitive.
Suzuki has made some fabulous vehicles, not least of which is the Alto which has sold so many units globally. I can’t see them failing with the Ciaz. In a C-segment car in the so-called budget market you’re looking at something almost like luxury. There are bells and whistles, with a couple of optional extras. 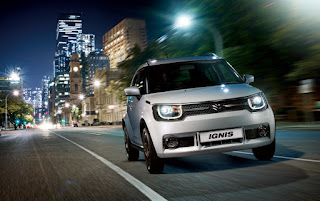 Now to the Tardis... small cars have a way of covering their interior space. The Ignis is probably the best example I've had the privilege to test. For an A-segment car the length of legs that would find this vehicle comfortable is superb. You would normally have to jump two segments to find that kind of legroom. Can you tell, i have long legs?


The electric blue color and uniquely cupped running lights give this vehicle an attitude that befits those who are cool. It is not average. The interior takes a little getting used to visually, but it is practical in a right-brained way. It is where engineering meets art and tells you stories that won't be easily forgotten. 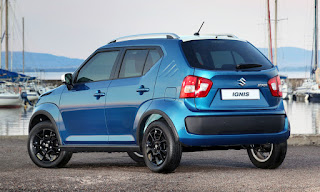 If you look closely at the rubber and cloth in this baby dragon, you will notice that it is built to last. The quality is very good. I know this from my Alto, but you might not, so it is definitely worth a mention (and I've used mine as a working vehicle!!) The touches of color and strong design features ensure an engaging experience.

The ride... oh boy. Like any car, it isn't a fan of wind, but it remained sure footed at speed even in windy rain and water lying across the road. I never felt like it was going to go anywhere but where I was steering. And the steering was almost light enough that I could direct it with my thoughts. 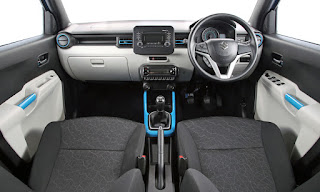 The ride height of both the driver's viewpoint and ground clearance gave a confidence on gravel roads that was backed up by having the wheels in the 4 corners. While it isn't a Jimny, negotiating trips to out of the way romantic getaways should be fun... I didn't unfortunately have time to find out. And while the boot is not exactly big, a night out hiking is definitely something that you could do...

Of course... I run. A lot. And this car had to be given back at some point.... and then I ran home. The trip home into the wind was hard; mainly because I had to leave the car knowing I wouldn't get it back soon! This car is a little legend and remains firmly entrenched as a favorite little memory. 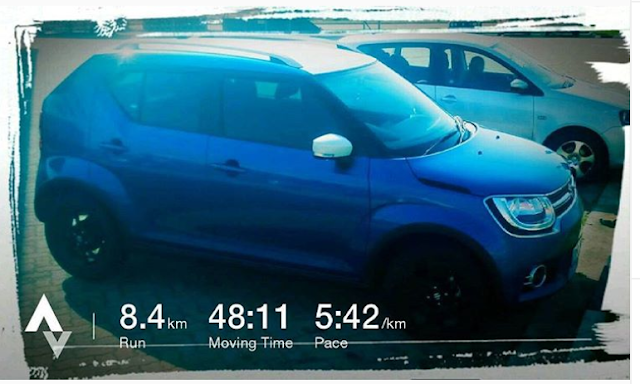