“This is the hardest thing I have EVER done”, was a thought that returned to my consciousness regularly going up Thabana Ntlenyana. And it was true, but not present as we left Lesotho. Here's the first part of this race report if you haven't read it yet. 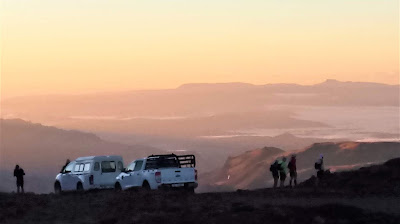 The first sunset and sunrise had passed. The doctor had said I must go… Coffee/hot chocolate mix, banana bread and left over Neolife bar were my breakfast. I put a fresh pair of socks on (because they were there; my feet were still fine). Off, out of the door. Tobie followed shortly behind as we headed up the road, turned left through the border and… wow… what a view! No, not the four 100km guys watering the sidewalk, but the view of the sun rising up over the Underberg down Sani Pass. Glorious. And warm!

Knowing I was 3 hours behind my “ideal” time, but only 30 minutes behind my “take your time” time, and feeling relatively fresh (or so I thought), I decided to push a little going down the pass. It was the pass we’d driven up and there was a good portion of the road on which to run or at least walk with intent and not worry about tufts of grass, hidden markings, or loose rocks and water erosion.

In short order I passed Chris and Bianca (aka the Malkoppies), and Nick and Kim who were all approaching the turnaround for the UTD 100. It had been a stress-filled few weeks waiting for Bianca’s passport that didn’t come. Thankfully the Malkoppies decided to still enjoy the ‘Berg… and seeing them lightened my mood. Kim is an inspiration on a number of different levels… and experiencing an effervescent greeting was magic: another energy boost! (Seeing how comfortable and strong Kim looked, I had no doubt about the outcome of her goal… getting the 100km monkey off her back was already guaranteed). Kim and Nick were merrily marching their way to the end. 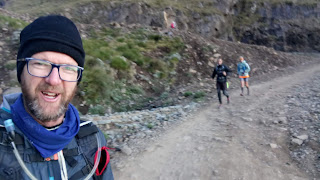 About half way to turning off the road a shadow joined a silhouette in a culvert… Cindy popped out of the bushes to join Stuart… and another fun greeting and exchange of encouragement! “You look good”, they said. I replied, “It’s my makeup!” We made futile plans to do a “Paul Freeth Squirrelling” tribute afterwards… What is fun if it isn’t full of life?

Dropping off the road on my bottom through gushing water was fun… so much water; water everywhere. Us drought-encumbered “Kaapenaars” (those from the Cape, Eastern or Western) were awe-struck. The grass was long and green. The trees, neither many nor big because of altitude, were all thriving; what a pleasure to see and experience. A series of short, sharp climbs and descents punctuated by some contour travelling followed along the side of the 12 Apostles that line the Sani Pass like sentinels. By this time all the 100km runners had run past me as my power failed. This was completely unlike what happened to me at Addo where I powered past even the 76km runners! What?! 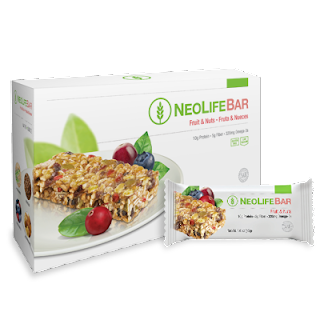 In every ultra you will experience high’s and lows, and they will come at you in different ways. The trick is to know how to deal with them… Don’t stop! Usually a good dose of food helps anything (sage advice from Nelson Mandela Bay’s own ultra king, Andy Wesson). And hydration key… you don’t survive without liquid! I’ve used Tailwind in my water for nearly 6 months. Carrying the powder is definitely easier than carrying litres of coconut water (which I’d used effectively before). And of course my trusty Neolife bars, with 720kJ per serving, offer superb energy and all around nutrition for ultra events. A little shot of caffeine to wake you up can do wonders, too.

Knowing I was hardly half way, I took it easy along the ridge, running seldom and slowly, but choosing to walk with meaning all the time 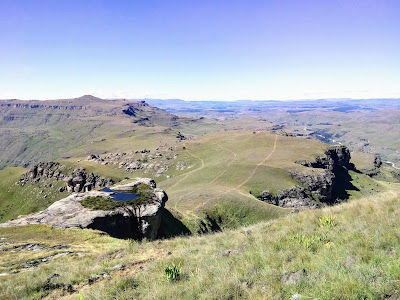 sucking in the views, the experience and the folly of fitness. I even saw a Dragon's Potty! It really is different up here, and there were no sane humans to confirm nor deny my swim...

Standing at the top of the last ridge I thought it would be a great place for a zipline! But then, that would be the easy way down… why not just do it the hard way and walk! The welcome at the aid station from Andrew Booth and family was magic (I’d have carried on following the markers instead of stopping had he not hailed me from across the fields… and it wouldn’t have been the first time!) Stew. Water. Other food. A flush toilet. Happy conversation. I stayed too long… but what comfort. And of course another miler caught me: Deon Braun, you yster! (tr: Strong man).

It was time to move. My biokineticist would be pleased as I stretched out my back and legs. The only thing I couldn’t do was foam roll my ITBs. No worries, with the stretching done, I hitched on my pack, looked up at the blue sky, saw the treetops respectfully bowing to the breeze, and headed back to the mountains leaving Deon to enjoy the hospitality in Sani. Ahead lay the “easy”, “run-able” section of this event: the Giants Cup Trail on Ezemvelo Parks land. 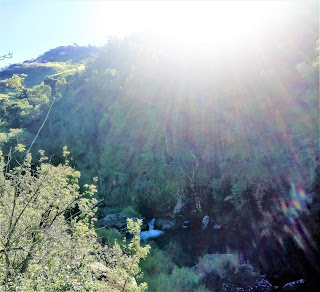 Just into the park again and I had a mishap… I was running. It was 5 meters up the side of a kloof (gorge) where the water was gushing down. The sound was akin to rock music; beautiful. The trees grew great and green overhead, and out of black cliff faces. The water was clear and dark, and you could see the stones and rocks at the bottom of the river and pools. Water gave its percussive tempo as it tripped over boulders into pools and along eddies. The grass was long and it didn’t like the way my trekking pole brushed it. It sent the pole in front of my leg… and I tripped and fell. Had the poles not been tethered to my wrists, they would have been lost in the water below. As it was, my knee twisted and I clung to the grass and path as I hung off the sloped cliff. My running was done. And my sports tape was 3km away in my bag at the last check point.

Walk it out. Try run. Stretch. Rest. Search my pack again. Nope. If I go back 3km, that is the end of AMUK. It would be another 6km. Not an option. Keep going. Rest. Stretch… walk it out… it WILL get easier.

Clamber through the kloof and water, mount a rock that would have been tough to climb 5km into a run (let alone 105km in). See Deon on a section of trail about 1km back… he’s catching up! I climb a hill and see people resting there! Stop… have a conversation about the beauty of the area and the madness of running through it instead of savouring a hike; and get offered pineapple. Those 3 pieces were the most delicious fruit ever,… sweet and pungent. While enjoying the fruit, I now had a new pain to worry about: I bit a hole in my tongue! There is something to be said for “pain transference theory”… Not a lot to recommend it, but in certain circumstances it may assist the sufferer!
500m on and I round a rock. Another big hairy baboon-sized rock 10 meters to my left jumps up and down! It is not even 4pm, this is NOT a hallucination! Yes, it’s a baboon and his congress; as he lands he strolls off through his mates as if he didn’t get a fright; he’s the boss. I walked on keeping a wary eye out behind. No worries…

By this time, although the knee was still sore, I could run a little, and I did. Until another tuft of grass caught my ankle… Run-able? Not for me! I descended gingerly through a channel of rocks, and allowed Deon to catch up. He knew the trail. He didn’t have sports tape… but we weren’t far off of Cobham. We marched. Fortunately it was comparatively flat and I could keep up. Slowly the pain subsided and I began to move more freely, taking in the amphitheatres created by the ‘Berg, scoping out Dragon’s lairs for later exploration, and enjoying the story of how Trail Magazine came to be. 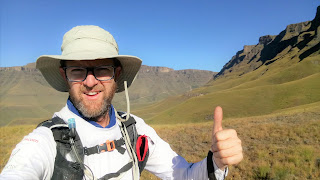 There are certain sponsors who stand out… Squirrels Nut Butter has to be one of them. On the lead in to Cobham SNB had posted signs and a Strava Segment to get runners to run (or try to). But Deon is a friendly guy, and just before that segment started we were about to cross a river; he greeted some cops on horseback… and lost his one trekking pole into the river. We chased up and down the bank, but found nowhere to get in. The pole was a gonner. We trudged the last 500m to Cobham. Dammit.

Medic? Yes, please! Strap my right knee, please? Yes, sir! Coffee? Banana Bread? Banana? Water? Farbar? Don’t mind if I do! What will the temperature be tonight? Nothing like last night… its looking clear, so it will probably get chilly! But this is the mountains… what chance of mist? Maybe, but… you’re chasing cut off and will have to push if you want to make the end on time!

As Deon and I were just about ready to get going, in walks Tobie. He’s asking for us to wait a bit and lead him through the dark… Do we wait? Do we go? Who sacrifices what?