The Truth of the Trail: Karkloof 100 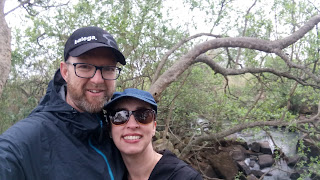 I said to Andrew & Deon, "On the long trail, either you are truthful, or you are dead. And perhaps this is why we are a close community of people who know and believe in each other. We root for each other's success because we relate so honestly."

Friday night at 8pm, the gun was worked into the theme tune to the Greatest Showman. We Karkloof 100 milers were off, not quite like prey in front of lion... but the atmosphere was just as charged! An amazing show to send us on our way. It had been hot all Friday. Dry heat. It was due to get as hot on Saturday.

AMUK update: I had aced Addo. UTD and me... let's call it a tie (although I might flatter myself here). And Mac Mac bit my bullet... I finished, but it took everything I had. 14 weeks later, I'd recovered mostly, but not been able to maintain 100 mile fitness. I was as ready as I could be...

Rene & Frikkie (official and unofficial AMUK wayfinders) were prepped and looking good. There was no hope for me to "beat" them. Rene had grown stronger through each event, while Frikkie maintained a strong, party-ish attitude to the journey that invigorates those around him.

Seeing friends made on this journey was awesome... knowing that they'd (mostly) be collecting medals and buckles 36 hours later was awesome. Knowing that I'd be exploring new valley's and territories with a couple of those friends was also exciting.

We left the tent and 1km in just before turning into WESSA my headlamp broke. The front fell off, batteries bouncing out. I put it back together and tried to run smoothly with my head and it worked for the next 20km when it essentially became a hand torch. Thanks to Cindy for offering your spare... wasn't going to happen 😉 Thanks to Malcolm from Squirrels Nut Butter who swapped his headlamp for my handlamp at Bushwillow! You sir, are a scholar and a gentleman. 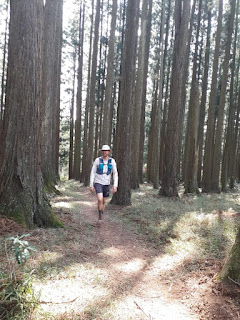 I don't normally struggle in the heat, but at Karkloof I felt like I didn't have the "oomph" to get up those hills I normally can. Food had been eagerly consumed and liquid aplenty all day Friday. But by 10km in I was starting to feel nauseous every time I ingested something. This had me a little concerned, I won't lie. Was it overhydration or dehydration? Because the former is infinitely more dangerous I chose to steer to the other side in terms of treatment. I did drink, but less water and more concentrated Tailwind. I ate more at the next aid station. By the time we got to 25km in, it was clear I was dehydrated and wasn't able to eat more than half a mouthful without wanting to share it with the world again! At that stage I was making sure I finished my 1 liter of liquid between stations and taking more in at the stations. I kept trundling on, still at my goal pace.

During part of this trundle Cindy Mills, Riana Henning, and five more of us were sharing stories (well, being a little heat-fatigued I was doing more listening). We were running up a little incline when we came alongside a warthog den. It may have been the 7 of us noisily commuting uphill that startled the big bull warthog out of his slumber... he bolted away to the path's right, around a bush (as they often do to avoid predators in the wild areas) and back across the road right through Musuko's sleeved shins. He was flipped over onto his side having the skin grazed from his shins. Startled and a little in shock he was able to carry on while messaging family and friends back home in New Zealand about his African running experience! He's a trooper, is Musi! Unfortunately the big hit from offsides by a South African on this New Zealander meant he didn't finish... but what great heart he showed! That was clearly offside; there was definitely something about the refs this last weekend 😝 (Reference to the Rugby World Cup).

We had been moving well... maybe a little too well looking back at it all. However, I told Riana and Cindy to carry on. I needed to regroup. I lay down in a field and did some yoga, stretching out my lower back, hip flexors and tensor fascia. They were tight, but it was just an excuse to start running my own race and see if I could get my ingestion and hydration settled again. It was going to be a long day...

By the time I reached 50km at Bushwillow I knew I was in trouble. Asking for ginger brew settled my nausea for the first time since 9pm; but I still thought about asking for a medic to check vitals. I was able to have a small amount to eat... still not enough. And a little more to drink. I lay down and closed my eyes for 10 minutes, then did some stretches again. On standing I felt nauseous, but didn't think much of it. I kitted up, swallowed some more liquid, and set off for Mbona.

It felt like a long stretch to Mbona, but it was also the first time I got through the "dark" of the mind. Ultra running is hard, and you will have highs and lows; like life. Its important to know when to quit the room and when to continue through the darkness. I knew continuing at this point was right. It was pretty. There were patches of sky that I enjoyed observing and the breeze in the trees helped with some of the tough climbs. I still had no real "power", but it wasn't as bad as the Friday evening.

Drink. Eat half a mouthful. Drink a little more. Catch up with yourself. Do I need help?

Mbona meant friends... The Scholtz/Freeth speed pacing team! It was good it was hot and hard and the eventual ladies' winner (Annalise) and sub-24 finisher (Paul) weren't through there yet. Encouraging words, friendly faces and some sunscreen were perfect things to prep me for the next section. I was warned it was the toughest section of the race compared to expectation. They were not wrong.

On the last stretch to Benvie (half way) I saw all the cool kids at the front of the 100 mile field, and the sprint distance athletes taking on the 50 miler downhill to Howick. I had expected this to be a mental challenge to me, but I found everyone encouraging and uplifting. Strangers and friends alike were top class cheerleaders! Did I need help? It was getting hot. It was very dry. Dust didn't settle, but hung in the air as it had most of the night. I was on my scheduled pace, but... did I need help? 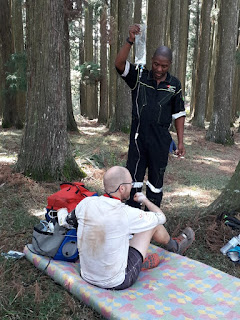 The last little kick into Benvie is up through a beautiful glade of cyprus trees; I passed Cindy, Tobie, Ronald and Dane here. The hill to get to the check point isn't that mean, but again, I had no gas; it was tough. This was the first race that Tracy, my wife, had joined me as a supporter during the race (travel is expensive, and Addo, while close, is inaccessible and ungainly for a very young child). I cried quietly seeing my heart in front of me taking a picture of my spectre.

A quick "hello" and she escorted me to the aid station where I was able to eat and drink more than I had in 20 hours without feeling nauseous; I could be okay, still! Off to get a treat from the physio and a rub down of my lower back to release the tensia, glutes and back so I could make it back home to Howick. I stood up.

Do you know what a vasovagal attack is? It sounds mean and scary, and can be a portent, but essentially when you stand up too quickly and the blood drains from your brain you feel dizzy and like you want to faint. In more extreme cases you do faint. It happened twice without me fainting. I called for the medic and went to lie down in the shade. I drank some more, not much, but the dizziness wasn't helping. Did I really need help?

I fell asleep very quickly, and don't rightly know for how long. I do remember Pamela looking and sounding strong and focused as she sat chatting to Tracy. I remember having more to drink... but being rather sleepy. When the medic arrived I was assessed and the unwanted advice was given. A drip was administered. I bargained that if this drip sorted out my blood pressure I could continue. It didn't. I made the call to DNF. It would have been Benvie to Mbona in 37'C with dust and wind; unwise at best, selfish and suicidal at worst.

I remained lucid throughout the first half of the race, the assessment and my DNF decision. It was the right call; the hero isn't infallible, the hero is the one that knows their limits and applies them when they will break. The hero is the one that works in between to improve their limits and benefit the limits of others. I am a hero. Those on the trails who DNF'd with me are heroes, too. Those that finished are also heroes... we're just a little more jealous than they are!

350 miles this year... and no blisters! #BalegaBestSocksEver 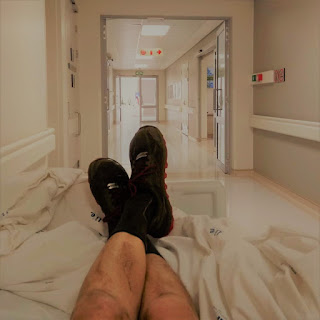 Run AMUK #1 is done... and there were two finishers. One official and one unofficial. Congratulations to Rene who aced another race getting stronger and stronger as the challenge progressed. And to Frikkie who completed these 4 in the calendar year. Both of you deserve every accolade.

And Tobie... who finished his 60th 100 miler at Karkloof. I'll probably never catch you, but the thought is there ;)

And thank you for following along... a twist in the plot sets up the next chapter nicely, I think... do YOU know what's coming?
at September 24, 2019

How long is your shadow?

We'd spent the day climbing. The trees far below seemed small. The stolen clementine had been a sweet treat with which to start the trek...