I've always enjoyed being outside!

Growing up in the 1970's and 80's we were allowed a freedom we don't dare give our kids today. At 10 years old I was by myself in a field barely 30 meters away from 2 chubby unicorns... being so close to two white rhino is a treasured memory, scary and marvelous. Could it happen today for a 10 year old? Will there be rhino's left in 10 years?

The word has changed. It has changed not only for us of the older generations, but for our kids, too.

How are we going to allow it to change in the years ahead?

Chubby unicorns are a symbol of our dreams, and to a degree of the health of our attitude to Earth. Do we allow their numbers to dwindle and die, or not? Rhinoceros are not the only animals in grave danger at the hands of "humanity".

In 2021 I will be teaming up with an organization that works in the "Eco-" space. This blog will share more of who, what, when, where, and how.

Here I'm using "Eco-" as a pun in its short form: ecology and economy. These are being used in their broader senses.

Over the last 100 years rhino numbers have gone from 100,000 to less than 2,500. Fortunately because of conservation efforts their numbers are now climbing again. These figures are from the WWF. Poaching is pervasive and there are many organizations working at different levels to decimate the demand, protect existing animals, and rehabilitate those injured and orphaned.

AND let's have FUN doing it TOGETHER.

Trails and Tales with Steven

A wonderfully different year 2020 has been for each of us...

This is how... join me on the weekend of January 8-10 (Postponed, due to Lockdown Level 3 and Covid-19; new date to follow soon). See the poster for more details! 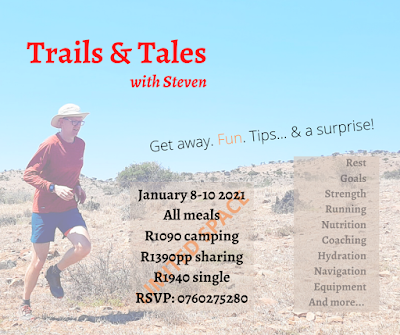 I have big dreams for 2020... find out what they are! See if you wanna join the fun! But at least learn how to beat the heat. 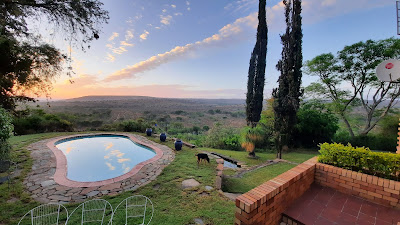 Running, recovery, stories tall and true at a great venue to learn and have fun... come March 2021 you'll be ready to run Addo!
Call me, mail me, dm me on FB or Insta... just book your spot before its too late.
Very limited spaces... and special treats for all who come courtesy of some "friends".